Beyoncé is on the cover of this month’s Vogue, the first in the magazine’s history to be shot by a black photographer, Tyler Mitchell. In the cover story, which was written by Bey herself, she opens up about the emergency C-section she needed to safely deliver her twins, being comfortable with her new body, and her historic Coachella performance. Beyoncé became the first black woman ever to headline the festival earlier this year, and now says she began prepping for it just six months after giving birth, “having a clear vision” for it that was “already written inside of me.” She also reveals that the performance’s most poignant moment, the singing of “Lift Every Voice and Sing” — known as the black national anthem — actually came from a private moment with her youngest daughter. 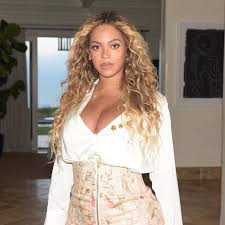 “One day I was randomly singing the black national anthem to Rumi while putting her to sleep. I started humming it to her every day. In the show at the time I was working on a version of the anthem with these dark minor chords and stomps and belts and screams. After a few days of humming the anthem, I realized I had the melody wrong. I was singing the wrong anthem. One of the most rewarding parts of the show was making that change. I swear I felt pure joy shining down on us.”


Recently, Bey says she researched her family’s lineage and found that she comes from a slave owner who fell in love with and married an enslaved person. On the significance of bringing the song to the national stage while knowing the full scope of her family’s history, she says the moment was bigger than her. “I know that most of the young people on the stage and in the audience did not know the history of the black national anthem before Coachella. But they understood the feeling it gave them,” she says. “It was a celebration of all the people who sacrificed more than we could ever imagine, who moved the world forward so that it could welcome a woman of color to headline such a festival.”

at August 06, 2018
Email ThisBlogThis!Share to TwitterShare to FacebookShare to Pinterest
Labels: Entertainment