Importance of Varamahalakshmi Vratham and the story behind festival celebration 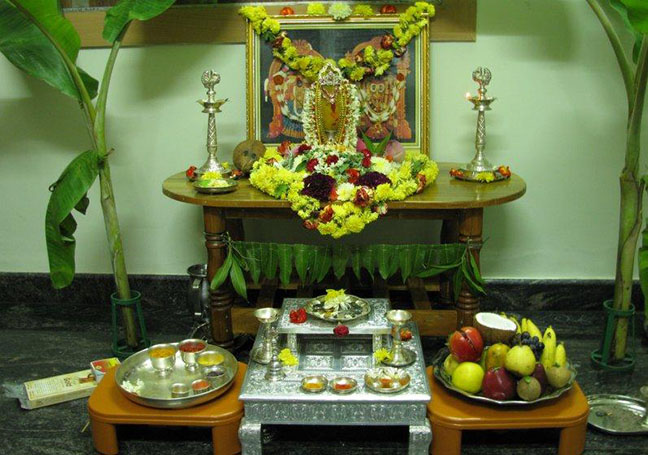 India is a country with many traditional values, cultures, religions, and festivals. Some festivals are celebrated at the national level but at some regional level. In many festivals, Varamahalakshmi Vratham is a major Hindu festival. It is celebrated by women in Andhra Pradesh, Telangana, Karnataka, and Tamil Nadu. It is celebrated in Shravan Masam (July-August) - Friday before Purnima.

Varamahalakshmi Vratham is performed by married women for the well-being of their family members. It is believed that worshipping Goddess Vara Maha Lakshmi on this day is equivalent to worshipping Ashta-Lakshmi - the eight goddesses of Wealth, Earth, Learning, Love, Fame, Peace, Pleasure, and Strength.

There are some popular stories related to Varamahalakshmi Vratham.


Varamahalakshmi Vratham: Story of a Shyamabala.

Shyamabala welcomed the elderly woman and asked for the greatness of Varamahalakshmi Vratham. When she returned to her country, she displayed the circle as the old woman directed. Soon his empire began to flourish and the prince appreciated for his good governance.

However, Shyamabala's parents had to undergo a number of problems and were suffering around. The king and the queen lost their wealth and people started a rebellion against their rule. Hearing the pain of her parents' empire, Shyamabala sent golden pottery, but the moment her mother set eyes on them they became an Ashes. After hearing this incident, she realized that the Lakshmi in the dress of an old woman, Lakshmi was had come out of the palace as a result of her mother. She asked her mother to apologize to Lakshmi and perform the groom's walks. They did so and were able to achieve the past glory.


Varamahalakshmi Vratham: Story of a Charumathi

Once in a town called Kundina, there was a humble and kind natured Brahmin woman named “Charumathi”. She loved her husband and family very much. Laxmi Devi got Impressed by her sincere devotion towards her family, Laxmi Devi came into her dreams one night. She asked her to perform the Vara Laxmi pooja and also explained her the details, procedure and when to do the pooja. She told her that the Friday just before the Shravana Purnima is a good day for the Vratham.

Charumati told about the dream to her family and friends, she was encouraged by the family and friends to perform Varamahalakshmi Vratham. they also participated and helped her in Varalakshmi Vratham. Thus, on that year, all the women from the town worshiped Vara Lakshmi Devi by performing Varamahalakshmi Vratham with sincere dedication and devotion. Goddess Lakshmi Devi impressed by their pooja, she appeared in front of them and blessed them with everything they ever wanted in life.

On this occasion, women perform Goddess Lakshmi's pooja with utmost devotion offering fruits, sweets, and flowers, usually, a Kalasam (representing the deity) will be decorated with a saree, flowers, and gold jewelry.

One of the Rakshai / Saradu (sacred thread) offerings after worship is completed and decorated on the women's wrist. It is worn to indicate protection and patriotism, and a number of articles are presented as a charity for grooms and gifts in good faith. This worship can be maintained without any restriction on caste or religion. To this day, many women believe this festival given them a wealth and blessing to the family.